I am a true extrovert. I love people. I am energized by being around them. I love watching people. I love interacting in a lively conversation. I love watching other people come to mutual understandings. I love popping into a colleague’s office for a spontaneous discussion about a fine point of social theory…But on the days that I am working remotely, I notice a change in my relationships. They are more intentional and formal, they are all about business, and I find myself wondering if as our work and life become more mediated by digital technology, do we lose something in our interactions?

In the paper Transformed Social Interaction: Decoupling Representation from Behavior and Form in Collaborative Virtual Environments, Jeremy Bailenson of the Virtual Human Interaction Lab at Stanford University describes the problem well. Social scientists have long known that there are both verbal and non-verbal signals in human interaction. “The former include spoken, written, and signed language; the latter include gaze, gestures and postures, facial expressions, touch, etc., as well as paralanguage cues such as variations in intonation and voice quality.” The thing is that the verbal and non-verbal signals do not always match, as in the case of sarcasm or knowing glances. So what are we doing to design technology solutions that take the complexity of communication into consideration?

The evolution of technology-mediated social interaction went something like this, “For centuries, written correspondence has proven highly effective for communicating ideas and, to a lesser extent, feelings. The telegraph permitted more or less real-time interaction. However, the telephone constituted an enormous advance, both because it afforded real-time interaction and because it allowed communication via paralanguage cues so important for emotional exchange. More recently, videoconferencing has permitted the communication of some visual nonvisual (NV) cues, but with little opportunity for “side-channel” communication among non-conversing group members (e.g., meaningful glances), and typically without allowing for mutual gaze among group members (Gale & Monk, 2002; Lanier, 2001; Vertegaal, 1999).”

There are A LOT of videoconferencing solutions right now, with every major software developer designing their own and bespoke software focused specifically on the task of connecting teams in different locations. (Google Hangout, FaceTime, Workplace by Facebook, Skype & Teams by Microsoft, Zoom, GoTo Meeting, WebEx, BlueJeans, ShinDig, and the list goes on.) This is just on the enterprise end; the educational community has its own series of videoconferencing solutions for virtual learning and communication, including Zoom, Skype, and Teams, but adding Adobe Connect and others.

In all of these solutions, however, there are limits to the nonvisual cues. What technology would allow for near-seamless, robust, human communication? This is the role of Collaborative Virtual Environments (CVEs).

What is a CVE? The best definitions were developed in the late 90s, and early 2000s as virtual reality technology converged with the science fiction paradigms that had been developing for decades. In Dave Snowdon, Elizabeth F. Churchill and Alan J. Munro’s book Collaborative Virtual Environments Digital Places and Spaces for Interaction they give a starting place:

“A CVE is a computer-based, distributed, virtual space or set of places. In such places, people can meet and interact with others, with agents or with virtual objects. CVEs might vary in their representational richness from 3D graphical spaces, 2.5D and 2D environments, to text-based environments. Access to CVEs is by no means limited to desktop devices, but might well include mobile or wearable devices, public kiosks, etc” (retrieved here)

That last sentence is where we are now.

The tech giant Facebook entered the VR market in 2017 with the launch of Facebook Spaces promising “a new VR app where you hang out with friends in a fun, interactive virtual environment as if you were in the same room.” But they were far from the first. There are dozens of virtual and augmented reality companies making big promises for the advantages of VR and AR meeting spaces over their videoconference counterparts.

“Combine the convenience of online meetings with the interactivity of face-to-face meetings: meet in virtual workspaces where you can collaborate, create and feel truly together with your colleagues!” –MeetinVR

“Reduce collaboration cost, increase productivity and unleash team creativity wherever you are and whatever device you’re using.” –Virtualist

And Rumii possibly makes the biggest claim, “A lot of companies claim to be making the world a better place. At Doghead Simulations, we’re actually doing it. Here’s the proof…”

In a 2015 Forbes article early in the growth of the company, founder of Rumii, Chase Glasco echoes Bailenson when he describes the problem they are trying to solve as, “I think one of the biggest issues is that you’ve got a lot of people who work together who don’t feel like they’ve been together. So using the power of social presence, we’re a lot closer…The thing with Rumii is you really feel like you’re with other people, your brain just buys into that sense of team, and collaboration is a lot stronger than using video.”

In Rumii we are moving towards the technology that would allow for paralanguage cues to be incorporated into the virtual experience: “The best part about Rumii that you can throw body language into the mix, which is something that video conferencing can never achieve. Glasco also points out that besides body language, which can scoop up more empathy from your teammates, eye-tracking technology is soon to make its way into headsets. Which means that you’ll soon be able to lock eyes with your teammates in a VR meeting environment.”

Where are we now?

With all of this energy and attention on CVEs it would seem that we are quickly moving from the Innovator stage to the Early Adopter stage in the diffusion of CVEs, but we have a long way to go.

The current teleconferencing technology use leaves a lot to be desired and the interactions could absolutely be designed to be more engaging and productive. You need look no further than the HBR article How to Run a Great Virtual Meeting by Keith Ferrazzi, or maybe take cues from Ken Perlman’s Forbes article on How To Run The Best Virtual Meeting Ever, or look at the long history of designing for e-learning in the edtech space. While we seem to be in the middle of the late majority of the diffusion curve for video conferencing, it may be that CVEs never take its place. The technological literacy barrier may be too great to overcome, and the factor of needed to purchase special additional hardware exclusively for this purpose might price most users out of the market.

Current experiments with large-scale CVEs have also been less than impressive, as Rachel Metz described in her MIT Technology Review article on her experience of Oculus’ fifth annual conference for VR developers last year. She described the limits of the experience included not being able to hear or see as well, not being able to whisper or make eye contact with fellow virtual attendees and the inability to demo the technology being presented. She concluded with ” “We’re getting closer and closer to being able to step between physical and digital worlds,” Zuckerberg said during his keynote speech. But to me that step still feels just out of reach.”

But some technology is getting closer to the promise of CVEs. In “Video conferencing sucks. Could “augmented” meetings replace it?” Mark Wilson explores the limits of  Spatial, there is a new “augmented reality conference room app” that is so good, “you stop thinking that you’re wearing bulky AR hardware, you stop considering the things you can or can’t do–and you just do what comes naturally.” 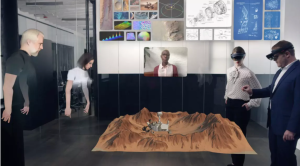 In a paper from 1999, Nonverbal Communication Interface for Collaborative Virtual Environments social scientists from the Computer Graphics Laboratory of the Swiss Federal Institute of Technology and the MIRALAB at the University of Geneva, described the problem of designing virtual environments: “We think that the path leading to a natural and realistic inclusion of nonverbal communication in NVEs [Networked Virtual Environments] is long and challenging, but crucial for the quality of face-to-face interactions within these environments.”

It has been 20 years since that finding, and I would largely say they are right.